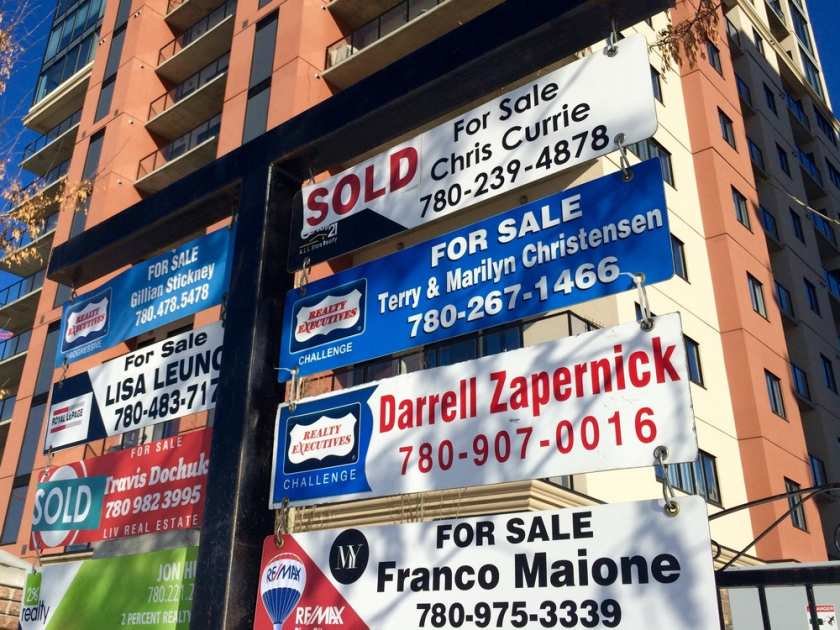 Edmonton resale home prices will soften and sales will slide further in 2016 — but not as much as other places in Alberta battered by a faltering economy, says a forecast by the Realtors Association of Edmonton.

“Edmonton and area has not felt the same effects of oil prices as the rest of Alberta has,” Steve Sedgwick, chair of the group, which represents 3,300 real estate agents in the Edmonton area, said Wednesday. “There’s a lot of exciting growth happening in Edmonton and we remain conservatively optimistic when it comes to our housing market.”

It’s an assessment backed by prominent economists, who say that Edmonton’s economy will slow in 2016, but not as much as other Alberta municipalities.

“While you’re going to continue to see some very negative numbers and some very negative commentary about the province as a whole, people have to bear in mind that Edmonton is a bit of an island in the storm,” said John Rose, chief economist for the City of Edmonton.

Rose predicts growth of 0.5 to one per cent for 2016 for the city and a slightly lower rate for the region.

Sales volume in the Edmonton census metropolitan area will fall by 2.3 per cent year-over-year to fewer than 17,000 in 2016, said the Realtors group in its annual housing forecast Wednesday. It would be the second straight annual drop in sales activity. There were 17,298 residential sales reported in 2015, down from 18,991 in 2014.

Sales of single-family detached homes will fall by 2.5 per cent, while condo sales are expected to drop 2.7 per cent as vacancy in the rental market eases and in-migration slows. The forecast said duplexes and rowhouses, which are more affordable and appeal to first-time buyers, will remain popular.

The forecast says prices will fluctuate through the year, but the 12-month average price for a single-family detached home will fall by 2.7 per cent as a large inventory of listings grows. Despite slower sales last year in a housing market beginning to cool, home prices still managed to end the year up slightly year-over-year.

The 12-month average condo price, which was $252,954 in 2015, is also expected to fall by 2.7 per cent year-over-year, the association said. That price will be buoyed by the introduction of new luxury condos downtown, Sedgwick said.

“There’s a lot of options available for homebuyers,” Sedgwick said. “With the low interest rates, if there’s buyers sitting on the fence, this might encourage them to get out and take a look.”

Rose generally agrees with the Realtors’ forecast. He predicts prices will drop by three per cent.

“Because we still have some suppressed demand for housing because of past population and employment growth, we’ve got a bit of a floor here, more than many other jurisdictions like Red Deer or Fort McMurray.”

But he cautioned that consumers shaken by grim headlines may lack the confidence to buy a home until the economy improves.

“I do see the Edmonton real estate market faring generally in better shape than Calgary or Fort McMurray this year,” Hirsch said. “It’s the centre of government, health care and education — broader sectors that support employment growth in Edmonton.

“I don’t see the downturn in the real estate market in Edmonton to be as severe as it will be in other parts of the province.”

Hirsch and Sedgwick said low lending rates will continue to encourage homebuyers, but the Royal Bank of Canada, one of the country’s biggest lenders, announced Wednesday it will be raising rates on several of its mortgages starting Friday.

Christina Butchart, senior marketing analyst for the Canada Mortgage and Housing Corp., said the situation has shifted from a market that slightly favoured sellers to a buyers’ market because of larger inventory and fewer sales.

“You started to see prices stall out in mid-2015 and they’re just starting to soften a little bit,” she said.

Meanwhile, despite Alberta’s economic slowdown, the assessed value of the average Edmonton house has still gone up this year, said municipal officials this week.

The typical single-family detached home is now worth $408,000, up 1.7 per cent from last year. The average value of condos, townhouses and duplexes went up 4.8 per cent.